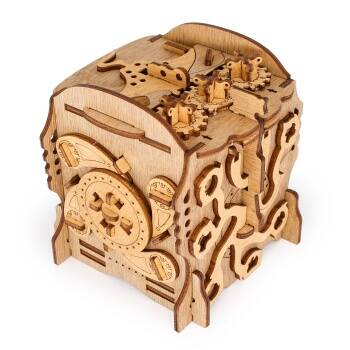 After the first publication about Captain Nemo and his submarine "Nautilus", which attracted great public attention, Jules Verne publishes the end of the story about the enigmatic captain. Shortly before his death, Nemo says that he will keep all his scientific discoveries and his autobiography in a small unsinkable container: "The last one to leave the Nautilus will throw the container into the sea, and the waves will take it and carry it away." Immediately afterwards, the Nautilus is destroyed. Of course, one might think that the whole story is only from the imagination of Jules Verne. But in private conversations he affirmed that all the characters were real people. And we can now prove that! Recently we found the "unsinkable container" and now you hold it in your hands.

It's time to uncover Captain Nemo's secret and find the lost traces of his discoveries.

The Cluebox is an interactive puzzle box with various puzzles and tasks that have to be solved one after the other in order to open the box. In other words, an Escape Room in a handy format.
Nothing is based on randomness, but only on logical decisions. The Cluebox is a brain game, which not only provides a lot of puzzle fun, but can also be used as a unique gift box. unique gift box gift box.

and a unique experience that will be remembered for a long time afterwards.

which have been precisely cut from high-quality birch wood using the finest laser technology.

and your own little Escape Room that you can take to every event.

Facts about the game:

Secret compartment: 2 x 2 x 4 cm
Replayability: Can be solved again with other players