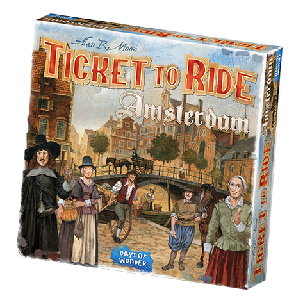 Ticket to Ride: Amsterdam features the familiar gameplay from the Ticket to Ride game series — collect cards, claim routes, draw tickets — but on a map of 17th century Amsterdam that allows you to complete a game in no more than 15 minutes.

You are in the middle of the Gouden Eeuw, the Dutch Golden Age. Amsterdam is the beating heart of global trade and the wealthiest city on Earth. Goods from around the world are piling up on the docks, in ship holds, in warehouses, and on the banks of its countless canals. You mean to profit from this!

In Ticket to Ride Amsterdam the train cards have been replaces by special transport cards. The miniature trains are also different. These are now miniatures of plastic carts, completely in style of the 17th century.