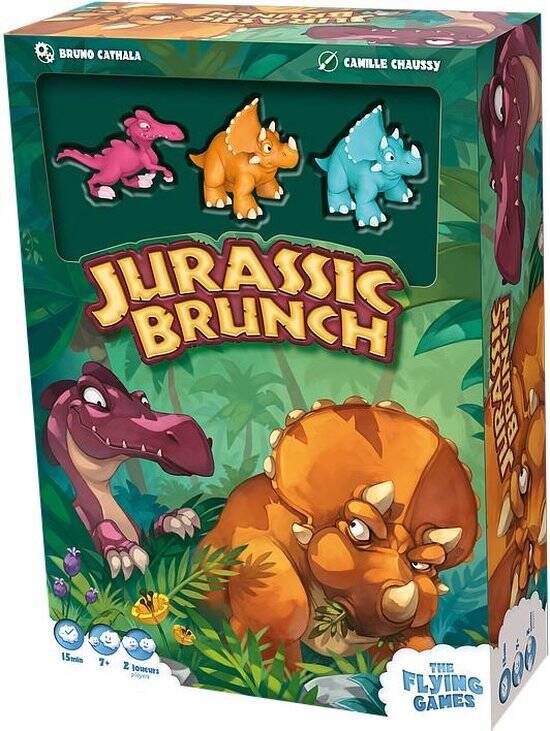 Young Triceratops are herbivorous, greedy but not docile species. To win, your Triceratops team will have to eat more leaves than the opposing team ... unless you choose to use the formidable and fast Raptor to eliminate all the opposing Triceratops from the prairie! Jurassic Brunch is an independent suite of Jurassic Snack that will allow you to play up to 4 players if you mix the two games.

Randomly form a square with the 4 tiles. Place the Triceratops on the eggs of their color. Shuffle the Grass tokens and place them, face down, in the 28 free spaces.

In Jurassic Brunch, the Triceratops have only one goal: eat grass. In turn, you have two movement actions that you can use to move one or two of your Triceratops or the Raptor.

In Jurassic Brunch, you can also charge your opponents or even the Raptor with your Triceratops to send them to an empty space of your choice. Triceratops move orthogonally and advance until they are blocked by another Triceratops, the Raptor, the edge of a board or a grass token. When a Triceratops encounters a Grass token, it takes its place and immediately applies one of the 6 effects (birth, Hiding place, Flower ...).

The Raptor, which will only appear during the game, has only one objective: to scare away the Triceratops. It is blocked by the Grass tokens. The Raptor moves orthogonally and diagonally but can only be moved once per turn. When the Raptor encounters a Triceratops, it takes its place. The Triceratops then returns to its owner.

The game ends when all the tokens have been eaten. Each player counts the number of leaves indicated on his tokens. Whoever scores the most leaves wins the game. The game also ends if one of the two players has no Triceratops left in play. In this case, the opposing player wins the game.