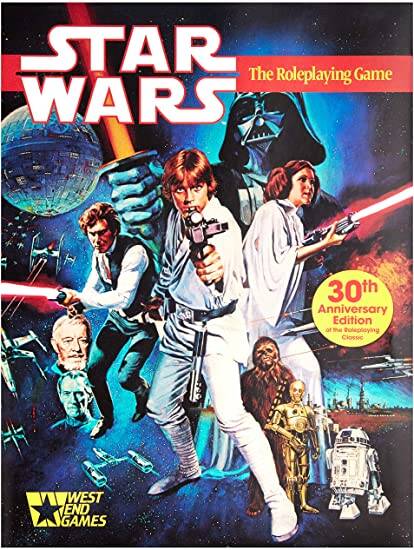 "My ally is the Force, and a powerful ally it is. Life creates it, makes it grow. Its energy surrounds us and binds us. Luminous beings are we."
–Yoda

Few books or games have had as enduring an impact upon the Star Wars galaxy and its fans as Star Wars™: The Roleplaying Game. Originally published by West End Games in 1987, it arrived at a time when the future of the Star Wars galaxy was uncertain, and it captivated a whole generation of gamers with rules and guidelines that made it possible to design and enjoy adventures truly worthy of the Star Wars universe and its ongoing space opera.

Now Fantasy Flight Games is proud to offer faithful recreations of this influential rulebook and The Star Wars™ Sourcebook. Our Star Wars™: The Roleplaying Game 30th Anniversary Edition is a limited edition set of both books, printed with higher quality than the originals and packaged in a stylized slipcase.

These books were sent to Timothy Zahn as references when he started to develop Grand Admiral Thrawn and his Thrawn trilogy. They introduced materials that were later adopted into Star Wars canon, such as the names of alien races like the Twi'lek, Rodians, and Quarren. They even inspired members of the Lucasfilm Story Group as they worked on their writers' bible.