Things That Go Squeak in the Night RPG - Engels 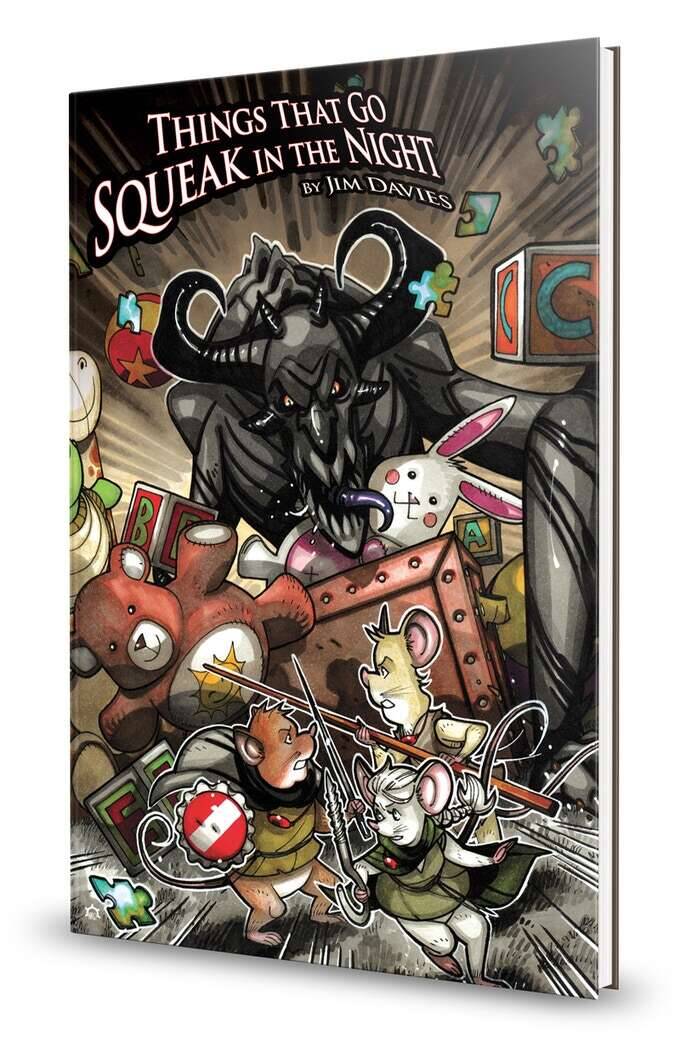 Things That Go Squeak in the Night is a rules-light tabletop role-playing game where you play heroic mice saving human children from evil faeries and demons, all while keeping yourselves secret from adults, in a contemporary urban fantasy setting.

The stories are about battling dark forces in charming animal adventures. Agents of the Micean Council are sent on missions to sneak into homes (and other places kids go) to seek out and defeat supernatural creatures that would prey on children. This mission-based game is like The Rescuers meets Supernatural.

The world of Squeak is a contemporary setting of mice and other animals living in functioning societies hidden from humanity. Animals have no technology of their own, and Councilmice do their jobs with cast-off human artifacts, as well as magical objects enchanted by bird wizards. The world involves spooky horror but also the charm of toothpick swords,  tiny demons that eat happiness, pigeon wizards, unhelpful squirrels, vampire rats, ghosts trapped in acorns, borrowing stolen cell phones from technology-obsessed raccoons, riding around the city on pigeons,  and portals to the faerie realm. The themes of the game are simple heroism and charming, cute animals. And black magic.

The rules are inspired by PBTA, with some changes and alterations to fit the style of the genre and setting.

How does it play?

All of the rules the players need are on the character sheet. When mice attempt something difficult, they roll a dice pool of six-sided dice. Any rolls of 5 or 6 generate Points that can be spent on Perks.

All actions a mouse can take fall into one of the following categories: Combat, Stealth, Manipulate, Stunt, Investigate, Resist Magic, and Read Person. Each action is a Powered By the Apocalypse-style move, each with its own set of Perks.  For example, here are the perks for the Combat Move:

Suppose the warrior mouse Megan Survivetheflood attacks a demon with her needle sword. She rolls five six-sided dice and gets two Points. She looks over the Combat Perks and chooses "My opponent is defeated" and "I choose if nobody or everybody hears." (She doesn't choose "I suffer no cost." Uh-oh!)

The Grand Mouser (GM) asks her to narrate the battle. She says: "The demon tries to swipe at me with its claw but I roll out of the way and scurry up its body. I get on top of the its head and drive my needle through its skull. It tries to scream but I penetrate through the jaw and into the carpet, forcing its mouth shut, so the adults in the other room don't hear anything. I guess I have to suffer a cost, so let's say I sprain my wrist as I try to keep hold of the needle while the creature twists its head back and forth before it dies."

Everyone at the table nods approvingly at this rad description.

What do you get?

Things That Go Squeak in the Night will be a 5.5" x 8.5" softcover book of about 100 pages, with interior black-and-white art by Nicolas Giacondino.

It will include the rules of play, character creation, with each of the Moves described with examples. The world information section is interspersed with four sample adventures designed to gradually introduce players to particular aspects of the world.

Random tables can be used to create adventures and antagonists. Here's an example of an antagonist generated with the tables found within: an orange frog-like demon, with a raspy voice, and the magical power to cause fear, who wants to eat blood, and hides itself with illusion.

The page margins will have images of random dice rolls, so you can flip to a random page to resolve conflict--great when you forget your dice or want to play in the car or on the beach.

The game is written by Jim Davies, a game designer and cognitive scientist, and illustrated by Nicolás R. Giacondino (N.R.G!), is a professional illustrator and comic-book artist, based in Mar del Plata, Argentina. The game is laid out by Mike Brodu who has worked on such lines as Legend of the Five Rings and Shadowrun.